MANIFESTO FOR EUROPE OF THE TOGETHER–DIALOGUE FOR HUNGARY ALLIANCE 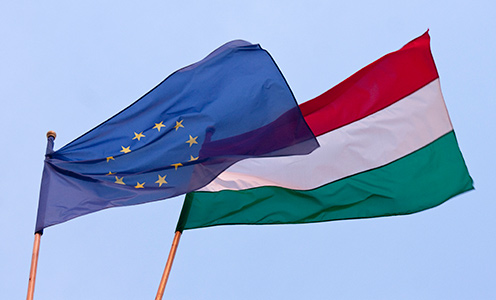 A PLEDGE FOR OUR FREEDOM IN EUROPE

We fought in 1848 and 1956 so that we could live in an independent, democratic state as part of Europe. The change of regime in 1989 made Europe accessible to us again. Ten years ago we collectively decided to join the European Union. At the 2003referendum a we chose membership by a large majority and we resolutely stand by this decision today. Once again we are part of the Western world to which we are connected by a thousand years and a thousand ties.

EUROPE IS IN THE INTEREST OF ALL HUNGARIANS

Membership of the EU for Hungary and its neighbours has made it possible for the vast majority of Hungarians living over the borders to travel freely, to study, to take on employment and to form a close relationship with the mother country. Economic development programmes spanning European borders can mean real progress for Hungarians living over the borders. We support Serbia’s claim to join the EU and resolutely support the opening of the Schengen borders to our neighbours. We support the efforts of the Ukraine for European integration. We want to reinforce our policies for Hungary and for our neighbours throughout Europe.

Instead of a strong European state, the government has started to build a semi-Asian dictatorship. It has eliminated constitutionalism, gagged the media, put obstacles in the way of political rotation and thrown our European resources to oligarchy and to the dogs. Giving the nod to Jobbik, it has turned a blind eye to the spread of extremist ideas. False patriotic slogans disguised the rapprochement with Russia. Its populist policies have created a model for numerous petty monarchs to follow. We have finished with this authoritarian experiment! We support the methods of the rule of law practiced by the EU which help us abide by our mutual and fundamental values together with every European government. We are turning Hungary back towards the West.

The government has become isolated in Europe. The doors opening to the Hungarian head of state are for the most part in the post-Soviet successor states – not one European leader has been seen in public with him. We intend to repair relationships with our European partners!  We will reinforce our contact with the Visegrád Four so that we can jointly uphold our regional interests. We will assert our mutual European interests through constructive dialogue. We will redeem respect for Hungary in Europe!

WE WILL DEFEND OUR EUROPEAN RIGHTS

Europe has opened the borders for us: as European citizens we can travel, study and work wherever we like. We vigorously stand by our right to work anywhere. We support young people in their active search for employment, so that they can take advantage of the opportunities Europe has to offer. We will also take the initiative for the EU to ensure the free dissemination of knowledge. We will prioritise research and development in the labour market.

Increasing nationalism and populism all over Europe has endangered our European rights. More and more member states are trying to limit our free rights to employment, although this is Europe’s most important struggle on behalf of young people and employees. We will not yield an inch on this: together with the other countries who joined in 2004, we will fight for our workers’ rights to legal security and equal conditions with local workers when they work in Europe. We will resolutely represent the interests of the half a million Hungarians who have been forced abroad by an irresponsible government and will facilitate their participation in Hungarian affairs.

MORE EUROPEAN RESOURCES AND BETTER USE OF THEM

In 2014 Hungary will receive a thousand billion HUF less from EU sources as it did seven years ago. The government has negotiated a hundred thousand HUF less per head for us in the seven year period just starting. It has wasted billions by not using Hungary’s EU allocation. As President of the EU, it was unable to influence the course of events in Europe. We will be efficient in representing our financial interests and will use Hungary’s entire EU allocation in a transparent way. We will use the opportunities offered by EU forums to assert our interests.

We will transform the use of EU resources, introduce clear conditions for tenders, publish public procurements and will involve civilian jury members in decision making processes. We will reinforce the European system of supervision and eliminate the regular corruption of the use of EU monies. We will investigate the fulfilment of contracts for public procurement signed in the last four years and if necessary submit them to criminal proceedings.

The government has decreased by huge amounts its spending on education and the health service, thus endangering the future of the country. It has built stadiums with our EU money. We will use these resources to create real, sustainable workplaces, develop enterprises, modernise education and further education!  We will prepare our students, researchers and entrepreneurs for global competition based on knowledge. We will offer special assistance to the technologies of the future, to energy efficient investments and the development of innovative sources of energy. We will reinforce our commercial contacts with the larger economies of the world. Instead of new motorways, we will improve railway and rail-based city transport.

Europe has become too far removed from us. We will initiate the positive influence of the Hungarian Parliament in EU debates, the growth of the democratic legitimization of the Committee, the improvement of transparency and public visibility of European decision making and the strengthening of the role of European citizens. We are working towards the reinforcement of the political role of the European Parliament in European decision making. We recommend a European referendum and the introduction of an ombudsman to represent young people. We will see to it that campaigns of parties in the European election will be conducted in a transparent and accountable way. We expect our European parliamentary representatives to actively cultivate their contacts with their constituents and give a regular account of their activities.

A SUCCESSFUL AND LIVEABLE EUROPE

We will improve the market inside the EU in terms of services. We will create stricter European supervision of banks and initiate a system for European banks to collectively cover their risks. Countries outside the EU must have real opportunities to participate in the new regulation system. We support the introduction of speculative tax in Europe and the winding up of offshore tax havens. We will initiate the reforming of the EU budget which must first and foremost serve the closing of underdeveloped areas. As a result of the crisis the gap between the European centre and the periphery has deepened even further. The key to the success of Europe is the reduction of the differences between various areas. Thus we represent the reform of development policies. We will reduce the bureaucratic burden that afflicts businesses; we will simplify EU rules. Our goal is to join the Euro zone, but this step requires the competitiveness of the Hungarian economy.

Using European resources we will help those under 30 in particular who have been looking for work for over six months to find jobs and to train for them. We will reinforce the European labour market welfare system. Besides creating jobs in Europe, we will act on behalf of our social security, for a significant reduction in poverty and social exclusion and for the integration of the Roma. We support those enterprises in Europe that support the equality of women socially and in the workplace. We will stand for the acceptance of Europe in the area of international development. We will consistently represent these aims in the legislation process of the EU.

FOR A GREEN EUROPE

The Orbán government has betrayed us with the signing of the Paks contract. It has tied our energy provision to Russia, raised the price of domestic utilities and prevented us using resources to develop alternative sources of energy. This contract has put every family in debt to the tune of a million HUF. It has tied the future of Hungary to the eastern dictatorship which subjugates its neighbours without inhibition and blackmails them through the provision of gas. We must cancel this disgraceful contract! In future we will only recommend international contracts preceded by appropriate social debate and preparation.

Our aim is the creation of a unified and sustainable EU energy market. In the long run we will strive for self-determination on energy and for the development of an energy economy leading to a clean environment. Europe must realise its sustainable aims regarding 2020. As regards the emission of greenhouse gases, the efficiency of energy and the use of innovative sources of energy, we support the ambitious new aims and objectives going up to 2030. We stand up for the reform of European agricultural policy which must serve sustainability and the reinforcing of countryside communities. It is only together with Europe that we can stop climate change which endangers the lives of all of us. We recommend that the EU be at the forefront of efficient global collaboration. With a unified policy on waste, we will stop the worsening of environmental conditions in Europe. We will help the preservation of biological diversity and improve the security of the environment and air quality.

We can only compete with the strongest economies in the world as part of Europe. We can trade successfully with other countries in the world within a European framework. We will encourage trained employees to immigrate to Hungary, so that our ageing society can support itself.  We will assert our interests on the global stage side by side with Europe.