The European Union (EU) should leave behind its economic growth obsession and focus instead on more transparent and sustainable policies, according to hundreds of people gathered at the flagship European Citizens summit event in Brussels.

A recurring question surrounding the Parliament elections in May was whether and how the EU will be able to regain the public’s lost trust in the European project. Today, hundreds of European citizens and people living in Europe voiced their hopes, expectations and demands as they reminded EU leaders that, if Brussels is not to fall into irrelevance for millions of its citizens, it should become more inclusive, fair and transparent not only on paper but in its proposals and policies too (like the Europe 2020 strategy).“Economic growth cannot be the sole driver of the new Europe that we were promised in the European elections. The hardship endured by many over the last years has prompted the need to discuss an alternative vision of Europe; a new approach that puts people’s interests and well-being first, and not as an afterthought of financial markets. We deserve a fairer Europe accountable to the people who make it, not to the CEOs and bankers who want to rule it,” said Emma Woodford, spokesperson for the EU Civil Society Contact Group.

While a recent Eurobarometer survey showed that 95% of EU citizens want Europe to do more to protect the environment, Jean-Claude Juncker, the European Commission’s President-elect, has hardly left an occasion unused to dismantle European policies on climate change and the environment. The ten environmental umbrella organisations in Europe are alarmed by the mission statements issued by the climate and environment commissioners-designated (here and here) as they commit next to nothing to keep the environment’s degradation to the lowest level possible. The 2nd Citizens Summit channelled Europeans’ voices and concerns into concrete, urgent demands to EU leaders and policy-makers. Participants discussed on how to deal with the many xenophobes, macho’s & anti-democrats coming to the new European Parliament. They agreed that Climate Change is the biggest market failure ever and that the narritve surrounding the solution should shift to a human rights discourse. They agreed that the future of the EU should be underpinned by an economic model based on a fair and inclusive distribution of resources, and not on a race for wealth accumulation; in a society driven by human rights and values and not by narrow, short-term economic targets; and in a shift from power concentration and a lack of transparency of political processes, such as the TTIP negotiations.

The Summit’s participants agreed that a leadership fit for the XXI century must understand that resources and services such as water, education, health, information, environment, culture and public spaces are common goods, not the privilege of a few. The EU is also a responsible global actor bound to spread its underpinning values beyond its borders: social justice, respect for human dignity, liberty, democracy, equality, the rule of law and respect for human rights. To make that happen, and among other proposals, the Summit discussed the Degrowth movement. As Vincent Liegey, spokesperson of the French Degrowth movement, stressed: “in reminding us that an infinite growth in a finite world is an absurd concept, Degrowth demonstrates the physical and also the cultural limits to growth. Through its radical critics and also through alternatives, initiatives and reflexions, it opens and experiments paths to a democratic transition to new sustainable and desirable models of society.”

Susan George, social activist and chairperson of the Transnational Institute, commented: “in a final, anti-democratic action, the outgoing Commission has rejected a European Citizens Initiative on the TTIP —the Transatlantic Trade and Investment Partnership.  If ratified, this scandalous, secretive treaty will lower standards for health, food, work, environment and hand over our most important decisions to transnational corporations.   This Citizens Summit is an arena both of resistance and of renewed commitment to build a different Europe—inclusive, fair, green and democratic.” 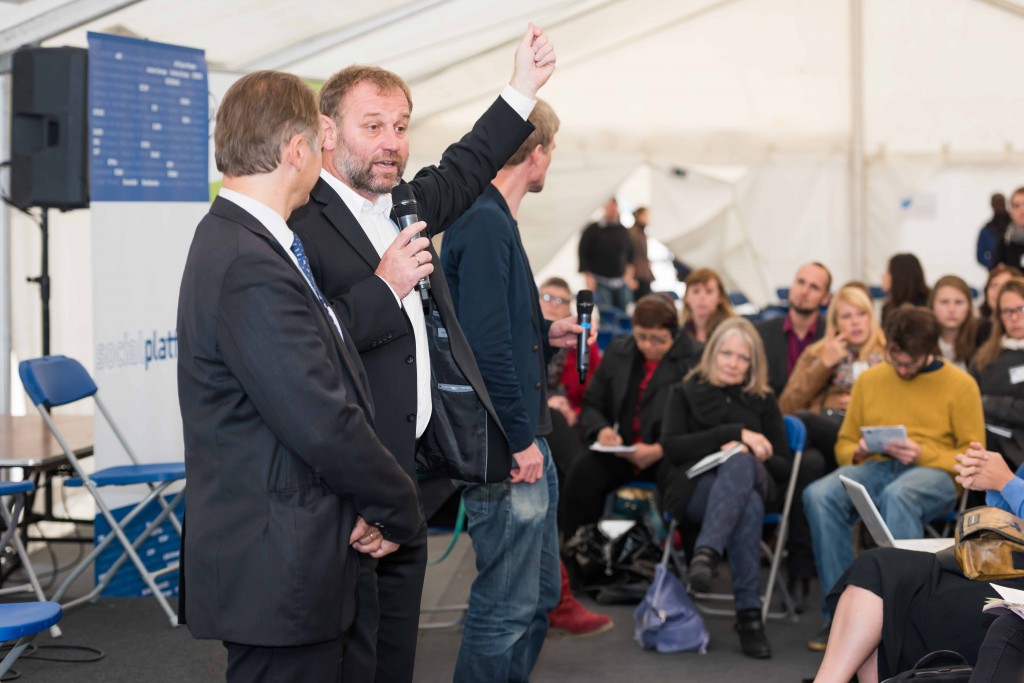 A dozen MEPs came to the Summit to have a direct conversation with citizens. Bart Staes from the Greens encouraged civil society by saying that every success so far has come when good proposals in the parliament were backed up by strong public pressure – citing the example of a ban on pesticides that kill the bees. Philippe Lamberts, also from the Greens, said he had read Piketty and realized fully that Europe is beyond saving if we don’t reverse the trend on inequality. Benedek Javor, another green MEP, warned that the brutal silencing of Hungarian civil society needs a much stronger reaction. He mentioned an example of a German MEP from the EPP using the same reasoning as Victor Orban to get rid of funding to civil society. A slightly different vision was presented by Hans-Olaf Henkel – MEP for the conservatives and reformists. His vision was one of a decentralised Europe where responsibilities were handed down closer to the people themselves. Here was one industry representative talking about subsidiarity, seemingly acknowledging – when questionned about it – the need for local currencies.

The EU is at a critical juncture. The economic crisis has turned the lives of millions of people living in Europe upside down. It cannot happen again. It is high time for our leaders to start listening to Europe’s citizens – the very people they are supposed to work for – and put people’s needs at the heart of their policy agendas. The 2nd Citizens’ Summit has sent a clear, bold message: if it is to survive, the EU should leave behind its growth obsession and replace it with a model based on rights, justice and democracy. A statement with which very few would disagree.