Of funds and values: Conditionality in EU cohesion policy 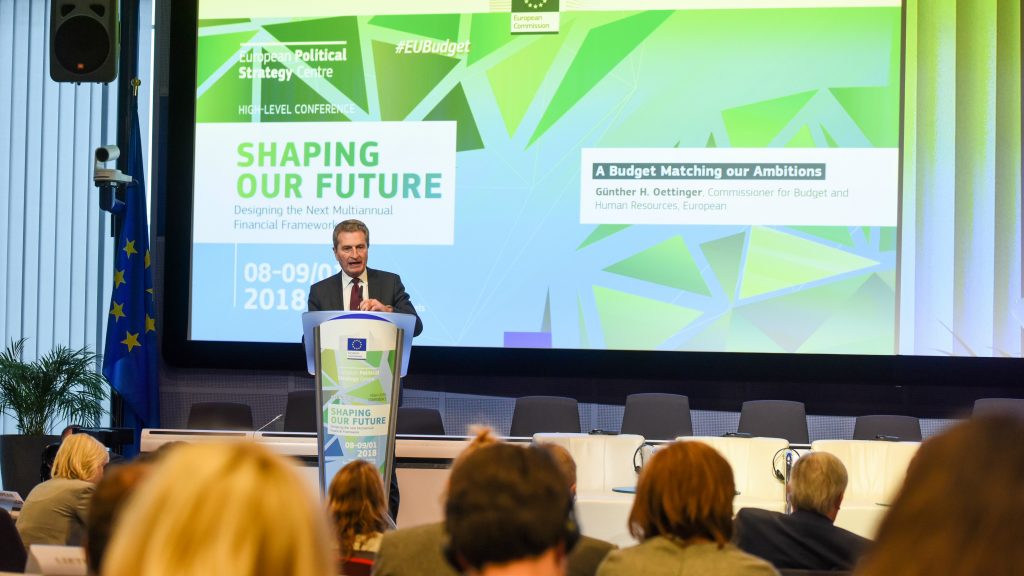 Günther Oettinger, Member of the European Commission in charge of Budget and Human Resources, speaks at a conference on the Multiannual Financial Framework (MFF) in Brussels, 8 January 2018. [© European Union , 2018 / Source: EC – Audiovisual Service]

As the EU’s multi-annual budget is being negotiated, the amounts and efficiency of spending matter but also priorities and European values when disbursing programmes. Smarter conditionality is needed, triggering less political backlash, and, where needed, direct payment to beneficiaries, argue Benedek Jávor and Laszlo Andor.

Benedek Jávor is a Member of the European Parliament in the Greens/EFA Group and Laszlo Andor, Senior Fellow at FEPS, is the former EU Commissioner for Employment, Social Affairs and Inclusion. Both are from Hungary.

The draft MFF proposed by the European Commission includes new tools for addressing the systemic misuse of EU funds. This is a major step forward, as the Commission does not only acknowledge the problem that EU funds can become more likely targets of fraud and corruption than national budgets in some countries, but also that what we are seeing today is a systemic problem.

We fully share the Commission’s analysis and agree that the situation is grave: state-level fraud is organized by political actors. That results in a waste of EU resources but inevitably undermines democracy, the public interest, and the rule of law, as well as the principles of partnership and planning inherent to the policies. We see that government actors use European funds to enrich their political or business affiliates with the ostensible goal to strengthen their power regardless of the financial and moral cost. A black book could be filled with cases representing a variety of countries and various political families, although close observers would agree that the current Hungarian practice is in the class of its own.
While we are deeply concerned, we also believe that the discussions have so far not explored all options and there is a high risk of launching a mechanism with serious flaws by 1. reliance on a political decision as a trigger of sanctions (i.e. to establish that country X violated the rule of law), and 2. threatening to cut country X off entirely from EU funds once the trigger is pulled. In our view, the triggering of sanctions needs to be objective and transparent which requires a solid set of indicators and benchmarks and that the sanction must be well targeted to hit the perpetrator of fund abuse rather than the innocent hostages.
The Commission proposal to suspend payments and commitments comes from a good intention. If triggered, this would prohibit entering into new commitments until the Member State in question returns to the expected path of European values. However, experience shows that abusive governments do not respond to such threats. In fact, they are likely to turn these to their own advantage by showing the EU as a biased body which blackmails and punishes the non-abiding Member States. If the EU withholds all the funds from the Member States, it can be easily interpreted as blackmail with a high risk of backfiring politically.
The EU must show that it regards only the best interest of the citizens when acting on sanctioning a Member State; taking those funds into its own hands and distributing them in the Member States according to the original goals would be the way to do that. In other words, our proposal is that the Commission in such cases should suspend shared management. This way the EU’s actions cannot be regarded as blackmail while it could avoid the corrupt allocation channels and financing of oligarchs close to governments.
Direct management solutions could be also introduced in a gradual and proportional manner: first, only those payments could come under direct control of the Commission, where they have already rejected payments as a consequence of irregularities or detected fraud. As a next step, in case of systemic problems in operative programmes or the complete management system and democratic control mechanisms in a Member State, direct or indirect management could be introduced in a more comprehensive in the case of serious and systemic breaches. Alternatively, a third type of management method: “assisted management” could be invented by planting EU experts in national agencies without completely sidelining them. This could be either requested by the Member State or, above a certain threshold (frequency of errors, suspensions and OLAF investigations), assisted management could be launched by the Commission as well.
Cohesion policy and EU funds are not “gifts” for Member States, but indispensable parts of a balanced and fair functioning economic governance and single market in Europe. Thus, complete withdrawal of funds should remain a  “nuclear option”. On the other hand, systemic corruption can lead to a situation where EU funds simply do not fulfill their original goal of improving competitiveness, developing infrastructure and investing in human capital or better governance. In those cases, the solution shouldn’t be to punish societies of the affected Member States but to repair the management system in a way which is able to efficiently prevent systemic misuse of funds by national political or management systems.
Choosing the best way forward is by no means easy, especially on such a highly politicised instrument. Pro-European forces in the European Parliament and elsewhere should be united and turn up their efforts in defense of EU values and resources. However, this should not only translate into taking a strong stand against populism, but also defending the rights and opportunities of the victims of misbehaving governments, which often can be found among the citizens of the Member State in question.

Categories
Anti-corruption
Back to Top